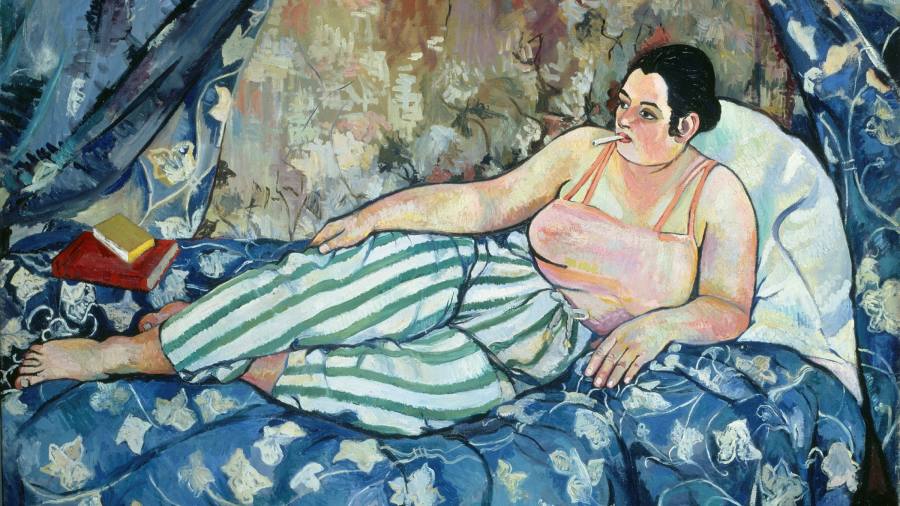 The curtain rises over a shapely woman in striped pajama pants, lying on a messy daybed. She threw a book aside and turned her thoughts inward, both carefree and theatrical. An unlit cigarette hangs between her lips, a la Bogart, and her un-corseted breasts collapse comfortably into a loose pink tank top. The lush greenery behind it could be a real garden or a canvas, since we are in an artist’s studio – the natural habitat of the women on both sides of the easel.

Suzanne Valadon started artistic life as a model and, even before leaving this career, she took over the tools of her employers and showed them how to look well at women. If the figure of the meridian in “The Blue Room” evokes Titian’s Venus, Goya’s Maja and Manet’s Olympia, it has nothing to do with their voluptuous availability. The crumpled goddess of Valadon seems ready for a night out alone with Netflix and a bag of crisps.

Suzanne Valadon: Model, Painter, Rebel, the Barnes Collection’s exhilarating tribute to a little-known masterpiece in Philadelphia, traces his rise from an impoverished childhood to a stint as a model in some of Paris’s most famous studios to a flourishing and lucrative career as an artist. Male painters have often tweaked her appearance as if she were a doll, but in a progression of self-portraits we see a spectacularly specific woman whose moods and experience are imprinted on her features.

Suzanne (originally Marie-Clémentine) Valadon was born in 1865 in the village of Bessines-sur-Gartempe to a single laundress who had the good taste to look for a future elsewhere. Mother and daughter have decamped in the artistic enclave of Paris. “The streets of Montmartre were home to me,” Valadon later recalled. “It was only on the streets that there was excitement, love and ideas – which other children found around their dining tables.” At 17, she was a single mother herself.

Barnes’ exhibition starts off a little timidly, with a few obscure portraits and some informative reproductions. This heart-shaped face and slender adolescent body appear in the murals by Pierre Puvis de Chavannes and some of Renoir’s most illustrious canvases, notably “Danse à Bougival” and “Danse dans la ville” (none of which are made the trip to Philadelphia).

“Do you recognize me? She once asked an interviewer, holding up photographs of the two panels. “I am the smiling dancer in her dance partner’s embrace, and it is me again as a young socialite, gloved up to the elbow and in a dress with a train.” Toulouse-Lautrec observed him more closely. They were lovers for a while, but the relationship is deteriorating before our eyes: Suzanne’s mouth twitches, her eyebrows furrow, her expression deteriorates from year to year.

These years among painters gave Valadon the confidence to practice their profession. Edgar Degas, who admired his “hard and flexible” side with the line, encouraged him. A relationship with businessman Paul Mousis allows him to stop modeling and create his own studio. As her male colleagues chronicled the city’s buzz in nightclubs, she studied her new home life in the suburbs, even persuading a cleaning lady to pose nude.

Among her first subjects was her son – and future painter colleague – Maurice Utrillo, whose young body she drew in soft but daring black lines. Valadon’s mother, Catherine, took care of Maurice, and the artist captures the bond that unites them: in a poignant gesture of blessing, the naked boy places both hands on his grandmother’s back, who bends over for him. dry the feet. This scene is only a memory: the engraving dates from 1910, when Utrillo was in his twenties and family life had become much more complicated.

By this time, Valadon, on the verge of divorce from Mousis, had acquired a much younger lover: Maurice’s friend, André Utter. In “Adam and Eve”, she portrays herself at 44, sporting only a smug smile as she pulls an apple from its branch and Adam / Andre, 23, grabs her wrist in a vain attempt at caution. Valadon seems content in the role of the original femme fatale, as if the prospect of bringing the first man into sexual knowledge flames her.

The idyll was eventful. After his divorce, painting became a financial necessity as Utrillo’s reputation began to eclipse his own. Valadon captures this mixture of love, resentment and competition in a pair of extraordinary group portraits. In “Grandmother and Grandson,” the dapper, bearded Utrillo leans – almost throws himself – towards us. His large white hand, the vehicle of his fame, forms a loose fist and pulls to the side. Catherine, hands crossed on her knees, gazes impassively in the distance three quarters. The family dog ​​digs his muzzle into the claustrophobic scene, as if he can feel worry buzzing through it.

In a 1912 “Family Portrait”, Valadon also inserts his lover into the inner circle. She places herself at the center of the group, challenging anyone to question their mastery of the medium or the household. Utter stands in the back, tall, blond and straight. Maurice collapsed on his forehead in an attitude of resigned melancholy. The shriveled Catherine, still at his shoulder, completes the pyramidal structure.

By the early 1920s, Valadon’s flamboyant and distinctive style had earned him a steady income and a stellar reputation. Critics praised his “masculine strength” and “manly power”. She painted, said one writer, “with unheard-of energy in a woman.” It’s hard to pin down what this gendered praise actually meant, since it avoided the pink gauze that some men (Renoir, say) coated the female body. There is no softness in her nudes or marzipan in her flowers. The limbs look like heavy objects, speckled with greenish shade. The rooms vibrate with strong patterns and intense colors. You feel the presence of paint as a thick, gooey substance.

In 1927, Valadon produced a magnificent self-portrait of the artist as a woman of a certain age. Heavy eyelids, angled cheekbones, and a throaty throat all signal a person who has inhabited their body to the fullest and is now at the peak of their powers. She looks in the mirror with an analytical eye, assessing her reflection with a mixture of candor and pride. Thinking back on her career, she once delivered her own version of Caesar veni, vidi, vici: “I found myself, I made myself, I said what I had to say.” Respect.

Diana Painter: A pointless ending for an icon