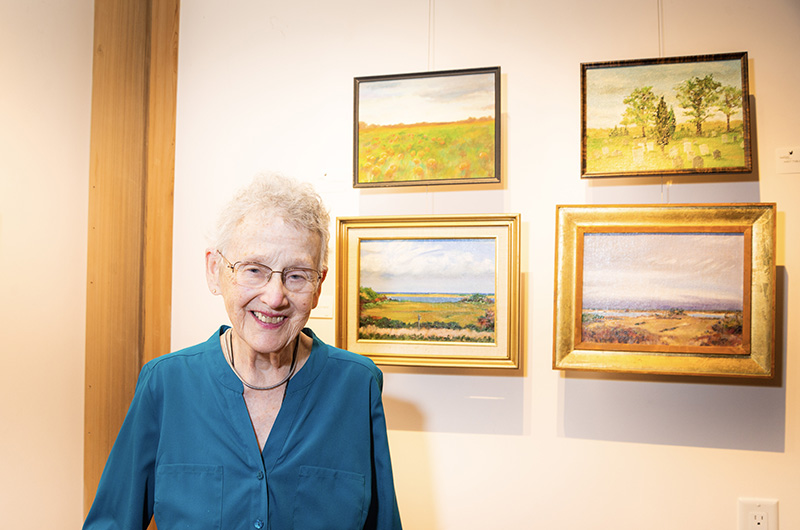 Norma Bridwell has been an artist since childhood. Yet it wasn’t until this winter, on the cusp of her 89th birthday, that the longtime Edgartown resident saw a public exhibition devoted solely to her paintings.

“I’ve never seen anything like it before,” said Ms. Bridwell, whose work is on display in the art space of the Martha’s Vineyard Playhouse through January.

It is also the first time that his work has been offered for sale in a gallery.

“We share a little secret,” said artistic director and theater executive MJ Bruder Munafo. “This is a rare opportunity for Islanders to get something from a very good artist who lives among us. “

Entitled My Horizons, the Playhouse exhibition offers a retrospective view of an unknown artist who quietly worked on her craft before the birth of many other established painters.

The show opened last week with a reception the artist attended with his son, Tim Bridwell – who traveled from France to be there – and daughter Emily Merz.

“We were all doing this together and we felt really good,” Ms. Bridwell said. “It was just something I had never felt before because I had never done it before.”

When her children were younger, Ms Bridwell said, she captured what she saw in wandering moments: sunsets at the end of a school day or a view of the Felix Neck Wildlife Sanctuary, so that she was waiting for the children to finish school or camp. .

“My job in the family… was to support Norman,” Mrs. Bridwell told The Gazette, recalling her late husband Norman Bridwell, whose books Clifford the Big Red Dog (inspired by his suggestion) have charmed generations of people. children.

The couple met while working as freelance commercial artists, but once Clifford’s books took off they were able to quit freelance work and move to the vineyard, where they first visited during of their honeymoon.

“I did paint and stuff, but it was just right for me, and a few members of the women’s club had it,” Ms. Bridwell said. “When we had auctions, I would get rid of a few. “

One art lover who ended up with a work by Mrs. Bridwell was Wiet Bacheller, a friend and neighbor of Mrs. Bruder Munafo.

“She stopped me one day while I was out for a walk and said ‘I have an idea for you: I really think you should do an exhibition of Norma Bridwell’s work,'” Ms Bruder said. Munafo.

“[Ms. Batcheller] showed me a painting she had, and that’s how it happened.

Dressed in an assortment of frame styles, the paintings on display at the performance hall reflect the career of an Island artist who also studied her craft at the Boston Museum of Fine Arts, where she took a regular studio course for over 25 years old.

“It has become almost like family,” Ms. Bridwell said. “I only quit a few years ago and it was very sad.”

Along with colorful still lifes of fruit and flowers in the studio, the show includes close studies of nature and a panorama of landscapes from one end of the vineyard to the other, with dark hills as well as scenes of beach and sea. sparkling lighthouse. Sometimes she starts with a photograph, Ms Bridwell said, but then her own vision begins to take shape.

“I’m just going to think about which direction I want to go,” she said. Often times you find yourself on one of your favorite beaches.

With a few exceptions – most notably the spacious On the Sound triptych, a view of the dunes and water – Ms Bridwell’s paintings tend to be smaller, and several were purchased at the opening reception.

“It surprised me, when I saw those red dots coming up,” she said.

Ms Bruder Munafo said she was so happy with the show that she kept it going until January, instead of closing at the end of a month as is the custom with the exhibits in the theater lobby.

“If I like a show, I like having them there longer than I expected,” she said. “It’s a joy to have Norma in there, absolute joy.”

My Horizons: Paintings by Norma Bridwell is open during the opening hours of the Playhouse ticket office: mvplayhouse.org.

Diana Painter: A pointless ending for an icon