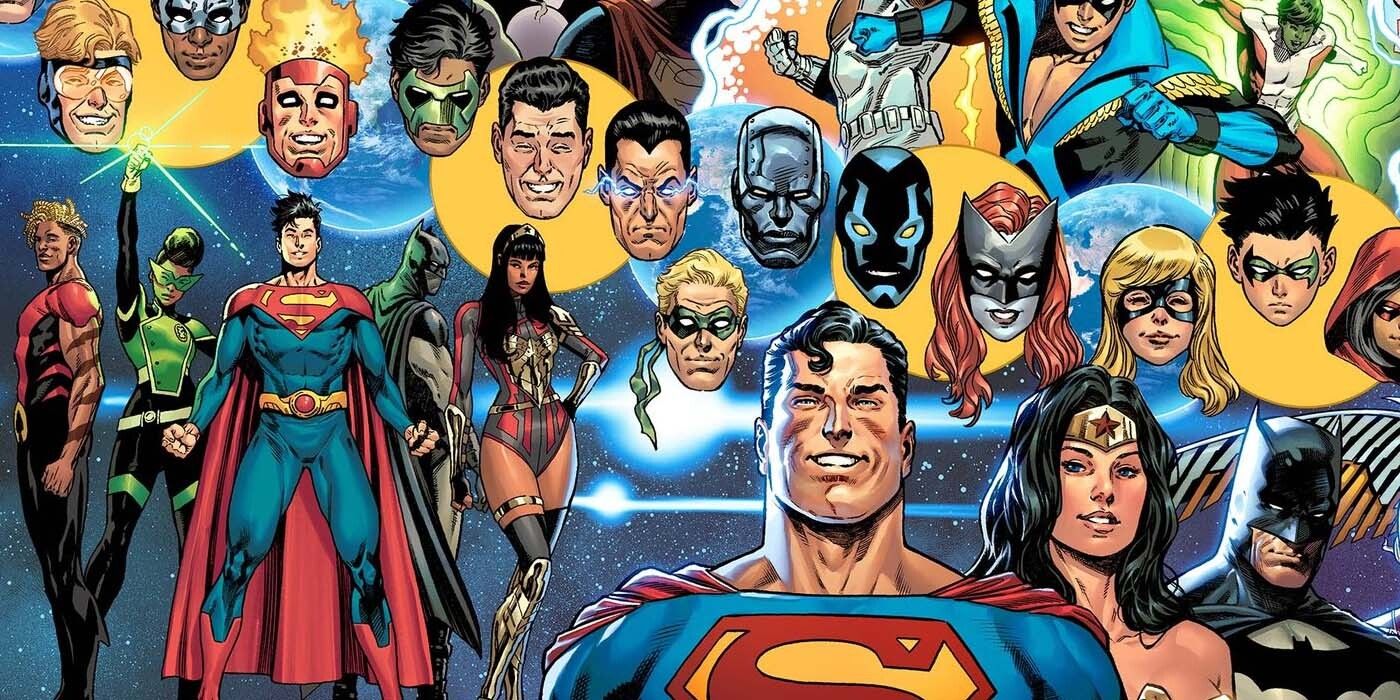 The Justice League is at the center of the art promoting an unnamed DC storyline that reminds Crisis on Infinite Earths.

Justice League writer Joshua Williamson teased the mystery project with art by Daniel Sampere and colorist Alejandro Sánchez, along with a caption that read “This is about legacy…” The art shows the League standing in triumphant poses, with inset panels that detail the origins of various figure stands. Additionally, the spread features floating heads of different heroes spanning a series of multiple Earths. These visual patterns are reminders to Crisis on Infinite Earths and its sequels, hinting that the Unnamed Book will involve the DC Multiverse.

RELATED: How Justice League’s Death Art Is Inspired By The Lord Of The Rings

In 1985, DC commissioned writer Marv Wolfman and artist George Pérez to combine its multiple timelines into one streamlined continuity across all 12 parts. Crisis on Infinite Earths. In the storyline, the villainous Anti-Monitor attempted to destroy different planes of existence. To depict this otherworldly feat, Pérez used the visual motif of multiple planets floating next to each other, capturing the basic premise and epic scale. Years later, DC released a Collected Edition of the book with cover art by painter Alex Ross, who added inset panels depicting critical moments from the series. Sampere and Sánchez’s art pays homage to these iconic visual choices, establishing its own significance.

In addition to Sampere and Sánchez Crisis images, this teaser art also highlights some of DC’s legacy heroes. Several generations of characters are featured, such as six different Green Lanterns, four Flashes, two iterations of the Teen Titans, and various characters from future state. The inclusion of these characters ties into the legend of Williamson while also connecting to Generations. This storyline reused abandoned DC elements 5G event, which supposedly replaced classic characters like Batman, Superman and Wonder Woman with new successors.

RELATED: Justice League’s Death Is The Flash’s Most Powerful Moment to Shine – Finally!

Currently, Williamson continues to explore the different worlds of DC in Justice League Incarnate, a series centered on heroes from different realities who band together to protect the multiverse from those who would destroy it. The book featured a rotating cast of rotating characters and performers and will conclude in March with issue #5, as the League takes a stand against Darkseid.

Outside of the Multiverse, DC plans to kill off its traditional heroes in the aptly named “Death of the Justice League.” The scenario will take place in Justice League #75 by Williamson and artist Rafa Sandoval, as the League faces the cosmic threat of the Dark Army. Williamson says that, like “Death of Superman” before it, “Death of the Justice League” will have far-reaching consequences for the rest of the DC Universe. “We want people to understand, this is serious and it’s going to have a major impact on the future of the DCU.”

KEEP READING: One of the Justice League’s Most Powerful Members Teased for Break Bad – Again

Can Marvel’s Weirdest Team Work In The MCU?

Henry Varona is a comic book writer and lover who never seems to take himself too seriously. He has worked with Midtown Comics, Multiversity and ScreenRant. Along the way, he’s collaborated with some of the biggest names in comics and film, but has never forgotten what makes entertainment truly special: the fans. He is passionate about wrestling, comic books, action figures and pineapple pizza. You can find him on Twitter at @HAVcomics.